Soccer training is continuing after school.  We thank  Ian, Sandra and Ms. Whelan for coaching.  Four teams will represent the school [boys and girls] in Cahir as part of the FAI Primary Schools 5-a-side competition.  The boys competition is today [Thursday the 28th February], the girls competition takes place on Wednesday the 6th March in Cahir.

Congratulations to our team who competed in the County Tipperary 5 a side soccer competition.  Out of 160 teams they got to the final four.  Well done all. 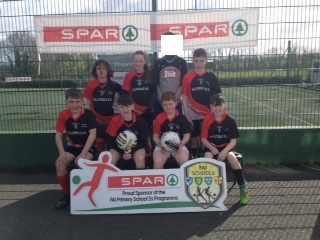 Soccer training is continuing.  We thank Ian and Sandra Sheehan and Miss Whelan for coaching.  Three teams (boys and girls) recently represented the school in Cahir as part of the FAI Primary Schools 5-a-side Competition (South Tipperary Qualifiers).  One of the teams has reached the finals stage of the County Tipperary Qualifier which will be held in Littleton on 26th April and we wish them the very best of luck.

After school soccer training will take place on Thursday with Ian and Sandra from 3-4pm.

Congratulations to the Under 11’s who won the Cup Final on Monday in soccer.

Ballyneale played Thomastown NS in the final.  Thank you to Ian and Sandra for training the pupils.  Well done to all!

Congratulations to the Under 11’s who have qualified for the Cup Final which takes place on Monday next the 19th at 10.15 am.

Ballyneale will be competing in Cup Group 2 against Rosegreen and St. Olivers.  Best of luck to all.

The girls team did very well in Cahir this week in the South Tipperary Qualifier of the FAI Primary Schools 5-a-side Competition.  During the day they won 2 of their games and lost the final game of the day.They were extremely unlucky not get through to the next stage. Well done to them again.

Thank you again to Ian and Sandra for giving their time to coach the girls and boys on Thursday evenings the past few weeks.